This is a short article discussing the relationship between a traditional attack lifecycle and an attack where the BitTrap incentive is present. We introduce a model to describe layered attacks and analyze the impact of applying this type of incentives to transform the attacker behavior.

We show that after adding the BitTrap incentive there is at least a 10x pressure to switch to the more benevolent path. Furthermore, if the hacker chooses to ignore and proceed with the traditional monetization strategy, the presence of the BitTrap incentive is neglectable in terms of the reward obtained (0.25% increase).

Considering that incentives can be deployed with almost no resource consumption (network, storage, computation) and that maintenance costs are negligible, the upside of investing in this type of strategy can be huge.

We are considering a setting with one attacker and an organization with multiple devices.
The attacker has a set of tools he can use to try to breach into each device. These tools can either be exploits that profit from software vulnerabilities or system misconfigurations, or social engineering or phishing tricks that make use of unsafe user behavior.

The attacker is trying to gain an economic advantage by hacking into the organization and accessing valuable information from one or more devices. This information can be sold on the dark web for a meaningful amount of money. In real life there are other possible monetization strategies but on this model we are focused on data exfiltration. Not all the devices contain this kind of valuable data, so the attacker will try to traverse through different nodes to access the ones he is interested in. To progress in his plans, the attacker will use his tools, or take advantage of trust relationships present among the nodes.

The organization has a layered approach to security. With only some devices on the perimeter that can be directly attacked. Security components patrol the infrastructure, trying to identify the attacker tools, suspicious behavior or attempts to violate access policy. If an event is detected, an incident response is started, kicking the hacker out of the compromised devices.

In order to analyze this setting we create a simplified model with two stages, X1: the perimeter exposed device, and X2: the target monetizable device. We represent the attacker tools as two numbers per device. The probability of successfully breaking into the device without being detected by trying each available tool, and the time it will take on average to complete the whole task.

This is a good representation of our conceptual framework because the probabilities and times associated with breaking into X1 or X2 can summarize several intermediate steps, or alternative targets in a succinct way.

With this model in mind we describe two Scenarios:

This is the traditional scenario. There is a single path for the attacker, he needs to first break into the surface asset (X1), and then complete a second step to breach the target asset (X2) 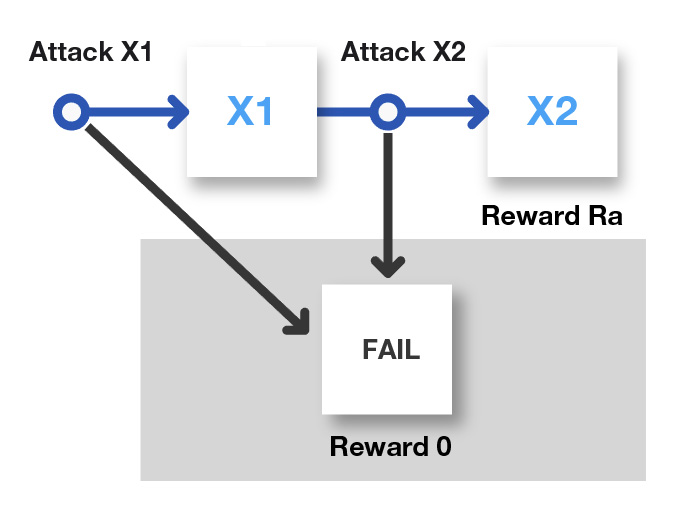 If successful, he will collect the standard reward Ra.

We model the first stage of the attack, breaking into X1, using two parameters P1 and T1. P1 represents the probability of success for the attacker. T1 represents the average amount of time invested in the attack for this stage, independent of the result.

We model the second stage of the attack likewise using P2 as the probability of breaking into X2, and T2 the time required given that X1 was breached successfully.

The parameters of the model are equivalent to Sa. 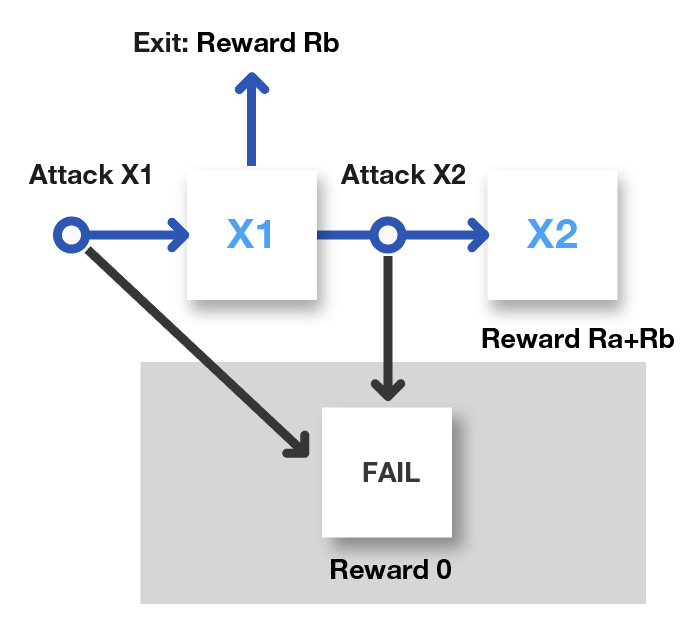 For both scenarios, the Probability of breaking into X1 is:

(Here P2 = P(X2|X1) is the probability of the attacker breaking into X2 given that he has already broken into X1.)

The expected time for trying to break into X2 is:

The expected reward for SA is:

While choosing to attack X2 yields*1 :

The return on investment for SA (expected reward per unit time invested) is:

Return on investment for SB choice 1 (exit) is:

Return on investment for SB choice 2 (Attack X2) is:

*1 : We assume that if the attacker fails with X2, he is detected and has 0 reward. Thus, he either gets a reward of Ra+Rb with probability P1.P2, or he gets nothing.

*2 : There are other possible extensions to the model that can be studied:
· Sometimes X1 is also monetizable. Like for example under ransomware monetization tactics. We could add an Ra1 parameter representing this reward, and calculate the expected rewards accordingly.
· We could represent different sets of exploits with dissimilar characteristics, each with their own P,T pairs.
· We could represent independently the exploits characteristic with three possible outcomes: Probability of successfully breaking into the device, probability of failing but remain undetected, and probability of being detected.

From this simple analysis we can conclude:


1. ROI -B-1 is 10 times higher than ROI -B-2, so there is a significant incentive for the attacker to choose the incentive on companies protected with BitTrap.

2. ROI -B-2 is only 0.25% higher than ROI -A, so there is no noticeable increase in the incentives to attack X2 after installing BitTrap. X2 is where the valuable information is stored.

This is a simplified model, but it can illustrate how the deployment of a simple strategic incentive can radically transform the behavior and perceived preferences of the attacker in a beneficial way. Considering that incentives can be deployed with almost no resource consumption (network, storage, computation) and that maintenance costs are negligible, the upside of investing in this type of strategy can be huge.